Malcolm Balk… racing back in action

May is the month when Malcolm Balk, Alexander Technique Running coach and competitive Masters runner, breezes back to our shores for his “Art of Running” workshops tour.

Malcolm was the winner of his age category at the Montreal Half Marathon 2016, in a time of 1:25:03. In this guest blog he shares his experience… 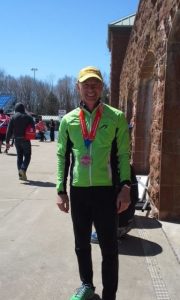 “You run on the legs, not with them” Percy Cerutty

I’ve been thinking about this enigmatic statement from the great Aussie coach for decades! Get a life you say! But what the hell did he mean. Like another great Australia FM Alexander, Cerutty was known for pushing the limits of convention. And like Alexander, he got results. Herb Elliott his best athlete was never defeated in competition at either the 1500 or the mile over a 4 year period during which time he won gold in Rome and set 2 world records!
So on a bright chilly Sunday morning on Ile St Hélène as humping it around the half marathon course for like the 10th year, I’m thinking about Percy’s quote: “on not with…”
Anyone who’s run a half at pace on less than optimal training knows that the legs are going to come into it….and probably pretty early on at that. And they did. As I went through the first k slower than I’ve ever gone before, my legs are not completely happy. At that pace they should be feeling very frisky, like a dog who wants to be let off the lead and go after that squirrel, but they don’t. And there’s 20.1 k still to run. Visions of crawling the last half of the race, with people I should have smoked shouting words of ‘encouragement’ as they go past “looking good, keep it up, allez…” flicker in my mind, amplifying my neurotic obsession with the legs. “Relax, breathe, find some rhythm, don’t panic…I try and settle in.
We hit the 5k mark right on pace and it seems as though my early fears were unwarranted. The legs don’t feel great but they don’t feel bad either and we’re hitting the marks. I’ve teamed up with a few other runners who seem to be aiming at the same finishing time and I hope to draft off them as we turn into the wind.
All going well…we hit the 10k mark slightly ahead of the target and I’m feeling pretty good. Then the long open stretch along the Olympic basin…2.5k into the wind! A gap has opened up between me and my ‘team.’ I know that if I lose contact now I will lose a lot of time as the wind will exact its toll so I make a crucial decision to accelerate hard and bridge the gap. Done! Just as I’d practiced on my training runs. No feeling of heaviness or fatigue…nice! Doesn’t last too long. By the time we turn and head back along the basin with the wind behind us the pace has picked up and I’m starting to feel it. Still 8k to go. Too early to inject the go for broke tactic that sometimes works near the end of a race where you find another gear. I have to wait but I’m starting to suffer. What’s Plan B? I remember old Percy and come back to my back. Lengthen, lengthen, lengthen!! As my back starts to respond to my direction, I can actually feel how I’d inadvertently started to sink, my legs find a measure of relief and I’m back , maintaining the pace, flowing. Another runner with whom I’ve exchanged the lead 3-4 times is really suffering….I can hear it in his breathing, too fast, too loud. He disappears behind me, the sound of his breathing fading till it’s gone.
I slow to get a drink, not going to try and choke it down at race pace. The others move ahead but another group comes up, strong, moving easily. I jump in with them and soon we’ve passed the first bunch. We’re flying along, pushed by the wind and the early/premature whiff of the finish. My legs are starting to protest, not a lot but enough to make me worry. I come back to my back. It lengthens and once again my legs respond gratefully.
Less than 5k to the finish….if I was feeling a bit friskier I’d start my ‘sprint’ but decide to maintain and make my move at the 18k sign. My legs, especially the hamstrings are heavier, less peppy, in fact they feel downright stiff. And there are ominous twinges in my left calf and right groin. If one of them goes it’s all over and a long walk to the finish line. Although there isn’t a lot of spring in my legs, between my cadence and my back I’m managing to maintain close to goal pace.
18k mark comes and goes along with my planned surge! Although I am slowing a little, several runners in front of me are coming back as well as several others who are not!! I’m sure my stride has shrunk considerably but my decision to maintain a high cadence is standing me in good stead. Only one person passes me, a young man in his early 20’s is my guess. No worries, it’s those grey haired bastards I’m worried about! We pass 20k and glancing back I see a grey haired man 40-50 meters behind…where the hell did he come from?! I decide to to take any chances and summoning one last heroic effort I start to hammer…well run a little more quickly anyway. And funnily enough my legs respond… I knew there was a bit of spring left. My back has also taken up the challenge and is feeling long and strong. If that guy is going to pass me he’ll have to work. I pass 2 more runners in my sprint to the finish, Mr Greyhair no where to be seen. It’s over! I feel very satisfied with my performance…best in several years. Thanks Percy!

Wednesday
04
May 2016
No Comments
This entry was posted in Blog. Bookmark the permalink.